The book opens with Cartledgehayes questioning what things, if any, are sacred. How does this question serve to frame the narrative socially and theologically? Were you surprised to find a clergyperson asking the question? If so, why?

Why do you think the author chose to use salty language in a book about God, spirituality, and the ordained ministry? What does the language contribute?

How would you categorize this book? Is it a memoir, a spiritual autobiography, an odyssey, an archetypal American success story, a story of mid-life transition?

Embodiment is a major theological theme. How is this theme revealed in the author's relationships?

What do you make of the therapist's comment that all relationships have a sexual component?

Why does the piano have such an impact on the author in the scene where Chris Flynn tells the congregation that he has only a 20 percent chance of survival?

Cartledgehayes's creativity erupts in classrooms, at the piano, and from the pulpit. What do you think is gained by having a high level of creativity? What are the costs?

Regional influences often shape not only the narrative but also the style of a writer. Cartledgehayes lived in northern Ohio for the first twenty years of her life and in the South for the next thirty years. Is she a Midwestern writer, a Southern writer, neither, or both? What elements in the text cause you to think so?

While this book is clearly written by a woman with feminist leanings, men love reading it. Why do you suppose that is?

In the midst of the activity and grief that surrounded the publication of Grace: A Memoir in 2003, my energy evaporated before I could write the acknowledgments page. Here, at last, it is.
This book exists because of the generosity of a cloud of witnesses who sustained Fred and me during his illness. After Fred's death on April 4, 2000, they also walked the stony road back to life with me.
Within the United Methodist Church, I thank A. Clark Jenkins, J. Lawrence McCleskey, and Amy Stapleton, each of whom offered me breathing room.
At Crown Publishing, I thank the brilliant Betsy Rapoport, who said yes to Gareth Esersky of the Carol Mann Agency, and Steve Ross, who said yes to Betsy. Thanks, also, to Stephanie Higgs and Kate Harris for their enthusiasm for and dedication to this project.
My deepest gratitude goes to Mary Flowers, Terry Smith, and Brian Mallory for their unfailing devotion and passion;
to the Flynn family for their generosity in letting me include their story;
to Lisa Knopp, Lee Gutkind, Leslie Rubinkowski, and Philip Gerard of Goucher College for showing me the beauty, and to the late Christine White, who not only coached me through my thesis but sent tulips the day I finished it;
to Joe and Nancy Turner, for teaching me to hear the hidden notes;
to the world's finest readers and friends: Nicole Oost, Julie Hilton Steele, Lisa Creech Bledsoe, Bill Howell, and Nancy A. Hardesty;
to the honorary presidents of my fan club: Jeanne, Judy, Jeanette, Patsy, Jill, Mary, Sue, Nancy, Deb, and Cathy;
to my late sister, Amy Thomas Reidling, for insisting, "You gotta believe;"
to The Cousins and Larry, for being themselves;
and to Tara and Jennifer, who light my life with their beauty and grace.

PRAISE FOR GRACE: A Memoir 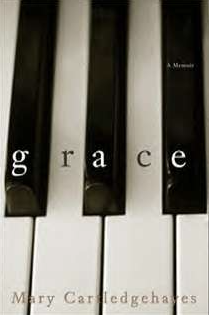